Discovering The Schist Villages Of Portugal With Mountain Whisperer

The schist villages of Portugal are one of the three unique types of villages throughout the country, located specifically in Central Portugal. As part of our journey through Portugal, Vanesa and I spent an evening in Gondramaz with Mountain Whisper and then did a jeep tour with them through two more villages. I only wish we’d had the time to visit every one of the schist villages, even though they are fairly similar to each other.

There are 27 schist villages in Portugal, The furthest south is Agua Formosa, almost due east from Nazare. The northern-most villages are Vila Cova de Alva and Aldeia das Dez, not far away from Serra da Estrela Natural Park. There’s no direct route to all the villages, and you could easily spend a full week if you wanted to see each of them.

To make things easier for your planning, here’s a Google Map for the schist villages of Portugal you can add to your own phone or laptop:

What is a Schist Village?

The Iberian peninsula, which includes Spain and Portugal, is covered with rock formations, including a lot of schist. It’s unclear exactly how old the schist villages are. I got the idea they were constructed in the past few hundred years, although there’s no information online to confirm this. At any rate, they’re not as old as the 12 historic villages of Portugal, some of which have remnants of the Roman Empire.

Gondramaz is one of the western-most schist villages, located in the Coimbra region along with most other schist villages. The village is less than 5 miles due east from where we stayed at Sete Quintas, but the drive up the winding mountain roads took us well over half an hour. There are only a few dozen buildings in the village, but we were enchanted at first sight.

The one narrow street is barely wide enough for a vehicle, with a few small paths leading to other homes off to the side. We left the car in the small parking lot at the top of the village and made our way down the hillside. There are very few people who live permanently in the village – just over a dozen. The rest of the houses are either summer homes or boutique B&Bs. There were a few houses in the village that were caved in, but most were in good repair. 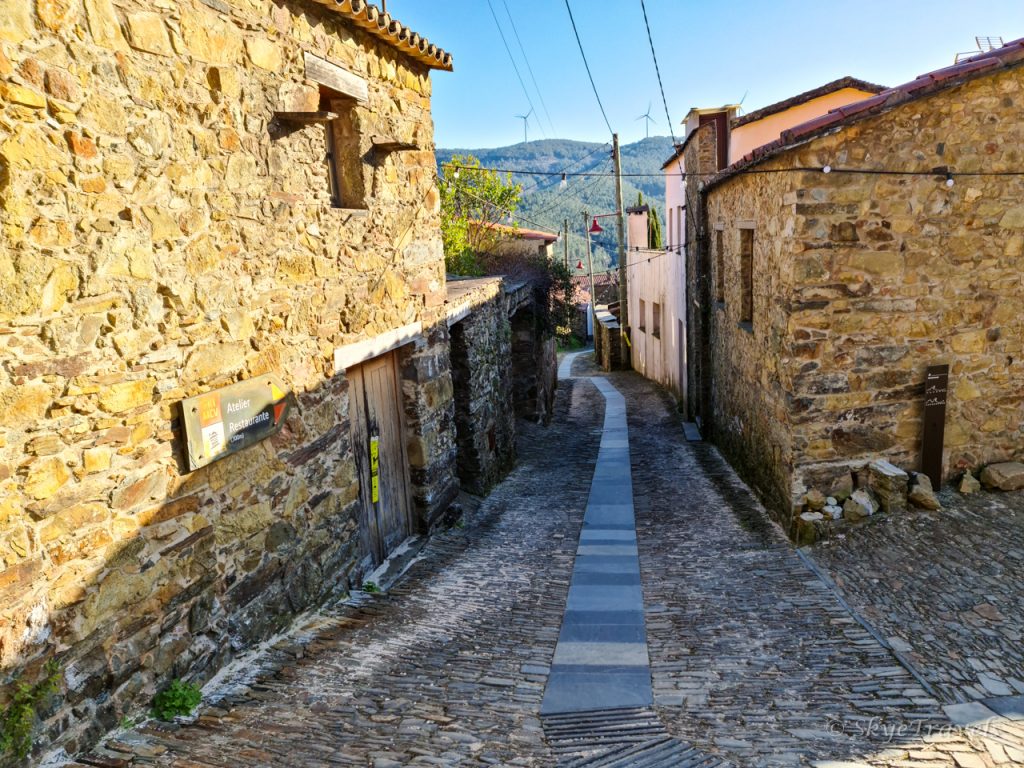 Mountain Whisper has renovated several cozy cottages as beautiful guesthouses. At the bottom of the village is their main office and cafe – just another one of the small houses. It took us a few minutes to locate it, whereupon we had a morning coffee, dropped off our bags, and then went back to the top of the village to meet our guide for the day.

Hiking to the Waterfalls

The mountains and valleys surrounding Gondramaz are full of trails, some of which will lead you past a waterfall. The closest one is just a few minutes down the hill from Gondramaz. Our guide took us down the trail while talking about the history of Gondramaz, the landscape, the inhabitants of the towns, etc. The first waterfall wasn’t that big, but that could have been due to months of very little rainfall. Although it was January, it was a very mild season. In fact, we specifically went for the snow and stormy waves in Nazare, but instead we had springtime weather. 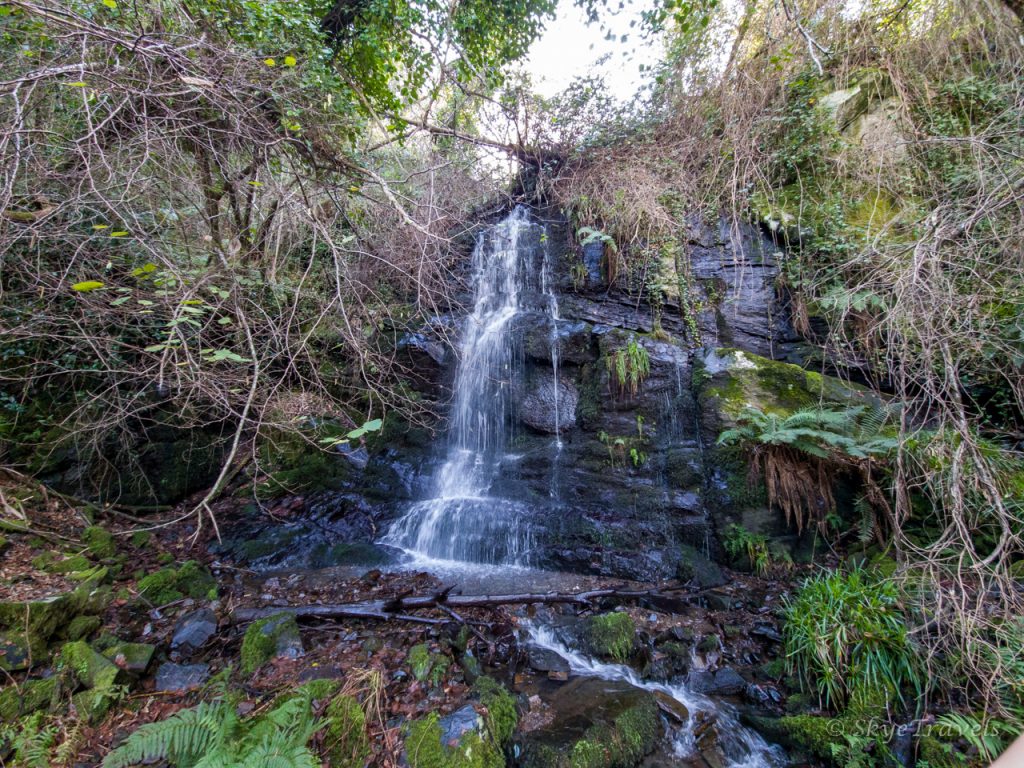 The bigger waterfalls were further down in the valley, which would have been a longer hike than we had time for, but I had the drone to capture some shots of them anyway. We only spent about an hour hiking, and then it was off for our Jeep trip to the other nearby schist villages. The first village we visited is less than 3 miles northeast of Gondramaz but it took us a full half an hour to get there, and that’s only because we went off-road with the Jeep. It was quite fun bouncing along the dirt logging trails of Lousã Mountain. Talasnal is roughly the same size as Gondramaz. There are a couple dozen small schist houses, just a few of which are permanent residents. However, it seemed to be slightly more popular with tourists as there were more decorations around the town. There was even a small cafe, which Gondramaz lacked.

I spent several minutes wandering through the narrow paths between the houses, getting quite a bit of drone footage, and meeting the many local cats before making my way back to the cafe for a most spectacular lunch.

Taberna Talasnal is a wonderful little cafe with just a couple of tables upstairs. As the proprietor didn’t speak any English, our guide ordered for us.

We started with a sharing platter of local cured sausages, cheese, and freshly baked bread. Each region of Portugal has its own unique cheeses and meats, and they’re all amazing. Our guide ordered a steak and salad for herself and then chose a local delicacy for Vanesa and me called chanfana. That’s a stew made with goat marinated in red wine for several hours until it just melts in your mouth. The dish was flavored with mushrooms, bay leaves and other herbs. Absolutely delicious! The portion size was way too big for us and we ended up taking half the meal with us to enjoy later in the day. Hiking through the Candal Schist Village With our bellies bulging, we drove just a couple of miles to the east (which took several minutes). Candal is another beautiful schist village climbing up the side of the mountain. It seemed larger than Gondramaz or Talasnal, but perhaps that’s just because it was a steeper hike through the village. We got to spend quite a bit of time at Candal. I flew the drone all over the village, and then took way too many shots and videos of each home,  garden, and the beautiful stream running through the center of the village. It’s hard to believe that the village has never been used as a setting for a fantasy movie. But thank god it hasn’t, as I would never want to see a production crew crowding up the village. Vanesa and I checked into the Palacio Salxesco cabin. The two-floor building was at the far back of the village. A swimming pool was getting constructed behind the cabin, and then it was just beautiful mountains covered in forests stretching off into the distance.

The kitchen and living room were on the first floor of the cabin, leading out to the backyard and pool. The bedroom and a very large bathroom were on the second floor. There weren’t a ton of decorations or colors, but I really liked the minimalist interior. As there’s no restaurant in Gondramaz, our dinner was prepared fresh and left in our kitchen to enjoy on our own time. Surprisingly, it wasn’t too dissimilar to what we had the previous night at Sete Quintas. Pork chops (I think), with migas and tibornada, but prepared a bit differently than what we had the night before. Of course, we had all the other usual accompaniments – bread and butter, cheese, and more delicious wine. Breakfast was in the small cottage which serves as Mountain Whisper’s reception, a small cafe, and their administration building. That home is at the bottom of the village, with beautiful floor-to-ceiling windows overlooking the valley below. Exploring the Schist Villages of Portugal

Most of the schist villages are built along a single road. All three that we visited were perhaps three or four dozen little homes. There are very few permanent residents in each village, but some of the homes are available on Airbnb or through other private renters. I believe Mountain Whisper is one of the few boutique rental collections.

Other than the few homes to rent, there are very few other commercial establishments in the schist villages of Portugal. No stores, salons, etc. So no late-minute purchases for your favorite dinner. Just the ultimate beauty that Portugal has to offer.

There certainly isn’t any public transportation between the villages. You’ll need to have your own form of transportation to get to Gondramaz, or any other village you want to visit. Car rentals in Portugal average around €150-200 per day, plus petrol. I would certainly recommend getting a hybrid car, as you’ll be saving quite a bit on gas throughout the country.

If you’re athletic. you could always hike between the villages, but that’s after you’ve driven up with your luggage in a vehicle.

There aren’t really that many places to stay in the schist villages proper. For example, Gondramaz has less than a dozen options between private rentals and Airbnbs. If Gondramaz is your destination, I would highly recommend staying with Mountain Whisper in one of their several schist houses.

It’s also a good idea to bring some food with you, at least some snacks, depending on which village you’re staying in. Talasnal and Candal had a single restaurant each, and Gondramaz didn’t have any, although the food provided by Mountain Whisper in our cabin was fantastic and certainly sufficient.

As I say with nearly every destination I visit, we didn’t get to stay long enough. 24 hours is barely enough time to properly enjoy just one village, let alone all the schist villages in Portugal. I would recommend a week at least. It is Portugal after all.

Click here to book your stay at Mountain Whisper. Disclaimer: My endless thanks to Center of Portugal and Mountain Whisper for inviting me to these amazing locations. As always, my views and opinions are completely my own.

Affiliate Disclosure
This post may contain affiliate links. These links help give me the wherewithal to continue traveling at no additional cost to you. For more information, click here.
travel
Previous PostThe Perfect 5-Day Highlands Tour With Haggis Adventures
Next PostA Day At The Convent Of Christ In Tomar, Portugal